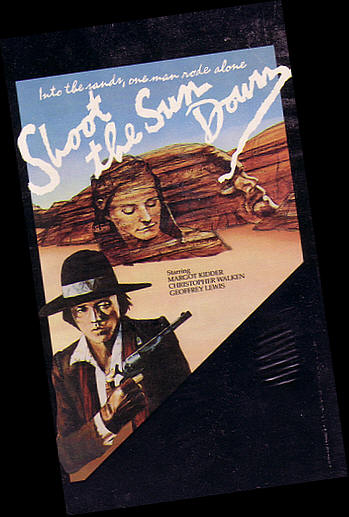 MPAA Rating: Someone gave this movie a PG. But I gotta say this is kind of a dark film for just PG. This is no children/family movie. The language is ‘salty’. Margot Kidder competes in a one-woman wet t-shirt contest. And the violence is not muted, cartooney or distanced at all. It’s right up in your face, close, jarring and bloody. Also, the main bad guy in this is the charming sociopath mercenary-type, a smiling bastard killing multitudes for profit and a giggle. I would feel more than justified in raising that rating to at least a PG-13.

Available to Own: Only on VHS. Yup. Outrage. Scandal. I repeat: NOT released on dvd yet. Maybe it’ll skip the dvd and jump straight to blu-ray. I’m not saying it’s a perfect movie, but since when was that the criteria? C’mon Hollywood, get it digitalized. It’s got stars. Thrills. Sex and violence. It’s got a friggin’ knife-throwing-cowboy Walken in it for crissakes! Put it on DVD. Just do it.

***EDITOR’S UPDATE (Nov. 2013): There is finally a ‘Director’s Cut’ release of STSD available on both DVD and Blu-ray. I just watched it on Blu, and the transfer looks and sounds really good. The biggest difference that I could see was that the film now has a different beginning. It eases the audience into the story, with pictures and a voice-over of some guy (not Walken) bringing you up to speed on the where and the why. It will be interesting to see if this film finally gets some appreciation now that it’s available to the masses in a digital format. ***

FUN FACT: You may recognize Geoffrey Lewis from a plethora of other Westerns, as Eastwood’s friend in a bunch of his later non-cowboy films, or more recently as one of the victims in Rob Zombie’s THE DEVIL’S REJECTS, but what you may not know is that he is Juliette Lewis’ father!

Similar Films: Stage Coach, Treasure of Sierra Madre, 3:10 to Yuma, The Man With No Name Trilogy

Movie In a Sentence: Mr. Rainbow (Walken) is a knife-throwing cowboy-type, wandering around Mexico in 1836 when he becomes intrigued by the plight of a young English lady (Kidder) who, unfortunately, is the indentured slave of an erstwhile navy captain (Brundin) who is now consumed with finding the buried treasure of Montezuma, an act which arouses the interest of the local filthy scoundrel (Lewis) who will stop at nothing to get the gold for himself.

Should You Watch It: Yes. It isn’t a perfect film, I know, but (1) Lewis is suuuuuuch a bastard here, ya gotta see it. (2) Margot Kidder was adorable back then. For more convincing, please refer to the gratuitous bath scene. And the clincher (3) Walken is an unstoppable bad-ass. He survives getting tied to the desert floor and attacked by vultures. He brings a knife to a gunfight and wins. And he steals Superman’s soon-to-be girlfriend. Boo-ya. 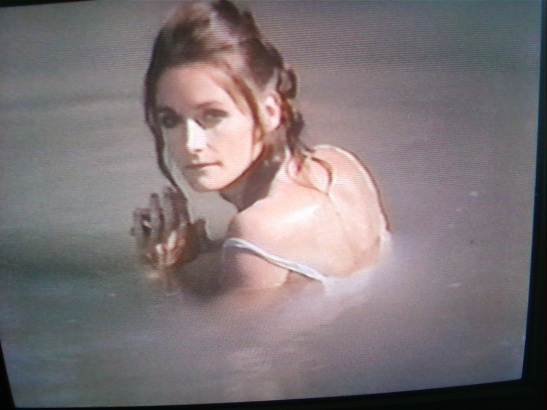 She doesn’t believe you for a second. C’mon, don’t kid a Kidder.

FUN FACT: Both stars of this film, Walken and Kidder, made their (arguably) biggest movies immediately after this one, Walken of course in The Deer Hunter, and Kidder as Lois Lane in Superman.

My Score: 8 out of 10. Geez, ehh I don’t know, maybe ‘8’ is too high. The editing is choppy. It’s reeeeeeeally slow in parts. I’d be hard-pressed to say it’s a “great” movie… But no, enough equivocating! It is good enough. I will stick with the ocho. And eight is great. 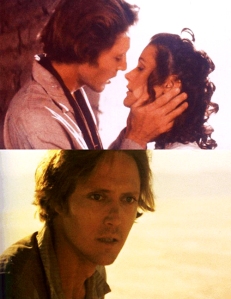 Walken Content: High. 80%, an hour, whatever. He’s in it. He’s all over it. He is the romantic lead and it suits him quite nicely. His character is this great, laconic, troubled, cowboy, loner, anti-hero. He has his own code that he lives by, loves by — and kills by!

Walken Quote: This is how he haggles a deal with the bad-guy when a four-foot solid-gold wagon wheel is on the line:

“ It’s two against one. A three-day ride to Santa Fe. Under those circumstances you’re dead. I’ll even the odds for a quarter-share of the wheel.“    ~  Rainbow (Walken)

FUN FACT: Originally, Walken was supposed to wear a pair of “colored” sunglasses (his character’s name is Mr. Rainbow), but the director took one look at Walken in the glasses and said, “Forget it. They just looked weird, not cool or believable at all.” But he still kept the name! 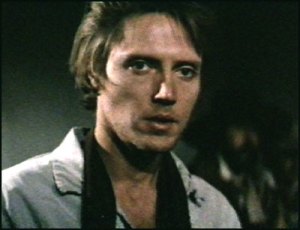 GENERAL: This film is an obscure little gem that’s been all but swallowed by time. Practically no one’s even heard of it, never mind seen it. And that’s a shame. This is the kind of movie that doesn’t get made anymore. The drawn out, quiet stretches of time that are punctuated with quick, savage bursts of violence.

Actually, no. I exaggerated. They do get made, but just not very often and they tend to fly under the main-stream radar. Two recent examples are Takashi Miike’s 13 ASSASSINS and Nicolas Winding Refn’s VALHALLA RISING, both are amazing films that share a common pace and tone with this one. Come to think of it, THE AMERICAN fits the bill too. So okay, they’re out there, you just have to find them.

All of these films somehow manage to be both brutal and contemplative. Whether about samurai, vikings, contemporary hit-men or knife-throwing cowboys, at heart these are the patient stories of quiet men who possess quick bloody hands and are driven by a peculiar sense of honor that won’t let them walk away from the fight. 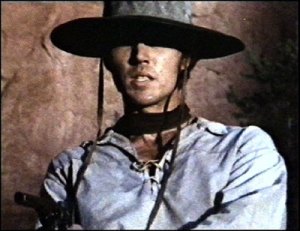 [Editor’s Update: You want more? Check out this great interview by Clare O’Farrell with the director, David Leeds, in 2003. Lots of behind the scenes info, making of, and otherwise interesting details. Good stuff.]

Leave a Reply to Something Something (todd) Cancel reply