Walken A to Z (a book review) 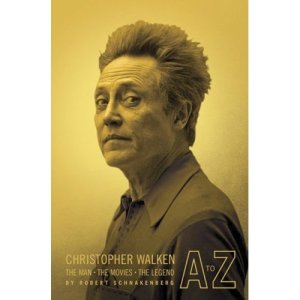 wrote a Walken-centric pseudo-encyclopedia called CHRISTOPHER WALKEN A TO Z (the man the movies the legend).

This little golden Walken-bible is jam-packed with Walken quotes, and anecdotes. It’s got factoids, bite-sized film reviews, and dozens of great pics. It is, of course, all alphabetized and cross-referenced, which makes it easy-peasy to find a particular entry, like, say: how Walken feels about horses,* for example.

One minor qualm I had was that I found a filmography to be oddly missing from this reference-book about his films. Even if they just copy-pasted the one from imdb, it would have been nice, y’know? Some kind of chronological ordering for these films he’s talking about. It’s missing that ‘big-picture’ view that ties it all together.

Otherwise though, as a reference book, as a compendium of information on all things Walken, it is quite nice. I like it a lot. But I do have to say that I found Schnakenberg’s opinion of the films to be, well … rather stodgy. Or perhaps just a little too highbrow-mainstream for me. I mean, he loved the films that are already loved, and he hated the films that are popular to hate. And that’s fine. It’s just that he never takes a stand on a guilty-pleasure or a sentimental favorite. He never picks the under-dog.

Reading some of his entries it becomes clear that Mr. Schnakenberg doesn’t really appreciate the comedic side of Walken. He is thrilled by tough-guy-Walken, and he adores dramatic-Walken, but goofy-Walken, I think, goes over his head. Or possibly it goes just to the side of it, making a burbling whizzing sound as it passes. Either way, he has no time for silly-Walken and his shenanigans, and he seems eager to down-play the merits of Walken’s individual performance based on the flaws of the film.

Which is unfortunate, because some of Walken’s best comedic roles are in movies that critics pretty much unanimously hated: Gigli, Envy, Balls of Fury, Joe Dirt. The list goes on.

I mean, say what you want about the rest of Gigli, but Walken’s 5-minute performance in that film is absolutely magical. From the moment he walks into that room, and casually but thoroughly berates Ben Affleck and J-Lo and threatens them with pie, to the moment he shrugs and suddenly leaves: Walken is mesmerizing.

Schnakenberg doesn’t think so though. He said Walken was “bored-looking”. He didn’t like the movie and didn’t like the Walken. So he went ahead and threw the Walken-baby out with the bath-water. And that’s a shame.

But enough of Gigli. Back to the book.

So Schnakenberg didn’t hate ALL of his comedies. Which Walken-comedies did he like? He proudly gave both The Country Bears

and Puss in Boots three stars out of four! Wait – wha?! Ouch. Really? Three stars? Perhaps he meant ‘out of six’. Or seven.

I mean, Walken is great in them, don’t get me wrong, he’s hilarious, but without him those movies are awwwwwful. Poorly made, and badly acted. – But I guess those can serve as Schnakenberg’s underdogs.

Well, it’s all opinion anyways. Mine. His. Yours. Just something to keep in mind when you flip through his book, as I sincerely hope you do.

Despite his sometimes questionable taste, this book is a must-have resource for Walken enthusiasts. I thumb through mine constantly, and though I’ve read it cover-to-cover I continue to uncover new ground, finding surprising fresh bits of Walken mythology to be further impressed with.

*He doesn’t trust them.