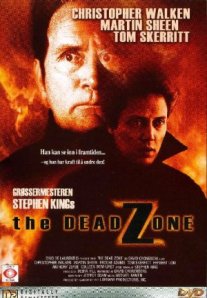 The Norwegian cover looks cooler than ours

Walken In Short: This is iconic Walken. He is the lead. He is intense. He is dangerously and excitingly unbalanced. Great role for Walken.

Movie In a Sentence: A schoolteacher (Walken) loses 5 years in a coma, and after awakening he notices three things: (1) that he has psychic powers, (2) his girlfriend did not expect him to wake up (like, ever), and (3) perhaps he can also change that nightmare future that comes to him in jarring painful visions.

Director: David Cronenberg – Anyone who isn’t familiar with this man’s work has a whole mess of great watching ahead of them. Try, for example, his adaptation of William S. Burroughs’ supposedly un-filmable heroin-soaked reality-bender NAKED LUNCH, or the Jeff Goldblum-science-made-a-monster tragedy THE FLY. 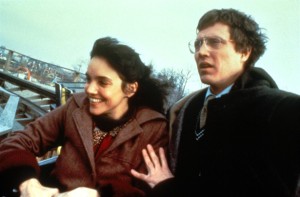 Tangent: I mean, really, if you haven’t seen any Cronenberg you could probably pick any film of his at random and be pretty sure that it is at least interesting, if not outright brilliant. Off the top of my head I also liked A HISTORY OF VIOLENCE, and lovedlovedloved CRASH. And no, I am not referring to the L.A. racial-profiling heart-string-tugger-CRASH (2004) that won so many awards and was beloved by all. No I’m talking about the sexualized-car-crash CRASH (1996) with Holly Hunter and James Spader that is probably a tad too much for some audiences.

Too what? Too…kinky. Too intimate. 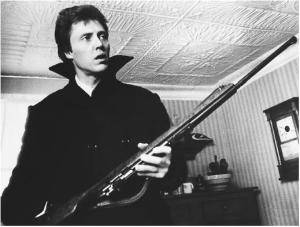 Too uncomfortable. Too sexy? Oh well. Too bad for them, because it’s actually just right for greatness. Oh, and the story CRASH is adapted from the equally amazing novel by J.G. Ballard. Who, if you didn’t know, is also soooo good.

Writer: Stephen King (story) Jeffrey Boam (screenplay) – King you know, but you may not know that Boam went on to write a handful of other somewhat lighter and cheerier screenplays like: INNERSPACE, LETHAL WEAPON 2 & 3, THE LOST BOYS, and INDIANA JONES AND THE LAST CRUSADE. Not too shabby, huh?

Actors Other Than Walken: Martin Sheen is the sleazy politician, Tom Skerritt is the Sheriff, Brooke Adams is his girlfriend, Colleen Dewhurst plays a great but short role as the Killer’s mom, Anthony Zerbe is perfect as the headstrong father of the boy Walken begins to tutor, and Jackie Burroughs is creepy as Walken’s exhaustingly religious mother. 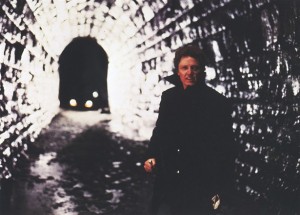 MPAA Rating: ‘R’ – A pair of pointy-pointy barber scissors is a serial killer’s weapon of choice. I’ll let your gory imaginations fill in the graphic and cringe-worthy details, but suffice it to say, the ‘R’ rating is apt.

Available to Own: On VHS and DVD, pretty common, pretty cheap. No Blu-ray yet, but this is such a classic, it’s bound to be made eventually.

Should You Watch This? Walken’s a reluctant and flawed super-hero in a dark and twisted tale adapted from the early Stephen King book and directed by David Cronenberg. Sooo: yes.

FUN FACT: I have no urge to watch the televised version of this!

Walken Content: 80% – As the lead, he gets plenty of screen-time, and we get to see Walken slowly transform from a happy and normal young-man, giddy in love, to the conflicted and broken shell of a man that this series of events has turned him into.

Fortunately, Walken is so much more interesting as a broken man. 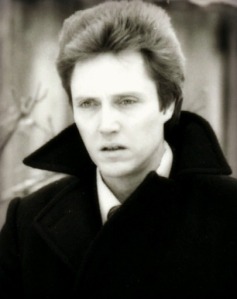 For one, his wardrobe goes from dweeb-at-school to sinister-formal-cool. His collars are magnificent.

Also, once he gets into it, he struts around on a cane for a bit and swings it around to illustrate his more vociferous arguments, and to work on his pimp-walk.

Yeah, and his hair goes from short-bowl-shaped Caesar to tall-and-wild. A good choice, I think.

This is classic Walken. It was even parodied (by himself) on Saturday Night Live in “Ed Glosser: Trivial Psychic.” Great stuff. That skit can be found online or of course on that Best of Walken SNL dvd. 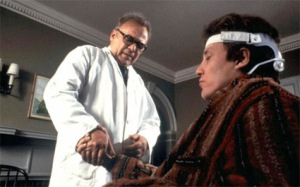 Walken Quote: Okay, the obvious choice here is his “The ICE. Is gonna BREAK!” line, which is great, undoubtedly. But there’s another line that I love and I want to mention, where the Sheriff (Skerritt) is trying to guilt Walken into using his ‘abilities’ to help him find a serial killer. Eventually, the Sheriff attempts the religious angle, saying that “if God has seen fit to bless you with this gift, you should use it.”

And that, apparently, was the wrong card to play. Walken’s been meek and mild this whole time, but suddenly the switch is flipped and Walken is puh-ISSED:

“Bless me? You know what Gaaahd did for me? He threw an 18-wheel truck at me. Bounced me into nowhere for 5 years. When I woke up, my girl was gone, my job was gone. My legs are just about useless. Bless me?! God’s been a real sport to me.”

~ Walken in The Dead Zone

Final Thought: This film is a parade of great moments. 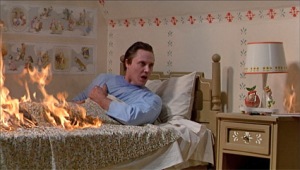 Quotable lines, stunning cinematography, and memorable characters. Disturbing, sure. Creepy and haunting, absolutely. This IS Cronenberg after all. And he is in fine form here. Everyone is. Enjoy.