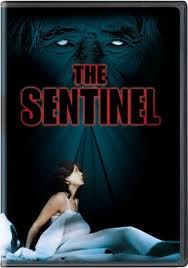 Walken in Short: He is the assistant to the detective. Flat character and a line or two. Not so much.

Movie in a Sentence: The Gates of Hell is in an apartment in Brooklyn, and the Catholic Church wants a bored fashion model to be the next sentry, so they move her in and let the demons and ghosts convince her.

Rated: ‘R’ for sex and violence. I don’t think anyone swears in it, but there is a plethora of bloody, quite gory scenes and a healthy number of nipples.

Available to Own: on DVD. It’s not common, but it’s still getable though.

Should You Watch? Eh. Not seriously, no. It is unintentionally funny, though. And its badness almost achieves goodness. Almost. Enjoy it ironically or not at all.

My Score: I’ll go 7 out of 10, and I’m being generous because I like Burgess Meredith in this. 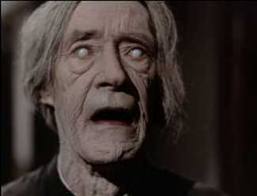 Walken Content: He’s got maybe three minutes and most of those he’s just listening to someone else. Move along, no Walken for you here.

“All killers. All dead. She went to a party with eight dead murderers.” ~ Rizzo (Walken)

General Thoughts: An ancient, blind, albino, Catholic priest (John Carradine) stands silent guard at the The Gates of Hell, which just so happens to be located in an apartment building in Brooklyn. It’s a nice place, really. Good neighborhood, close to the market, tastefully decorated. Too bad it’s haunted by the ghosts of dead murderers, criminals and (gasp!) LESBIANS!! Yes, that’s right: evil, monstrous, lust-filled lesbians.

Ahh! Oh. I was afraid you were lesbians. Ahh!

Scary, right? This movie demonizes (literally! DEMONIZES!!) lesbians, and does it in this kind of offhand, casual manner, like ‘Hello! Meet the Axe Murderer, Satan, and the Lesbians. Nice to meet you all.’   … Well, it got a chuckle from me. And that’s about the most response this late 70’s horror film brought out of me: a chuckle.

Sure, it was good in the way adequately “bad” movies are good: quotably awful lines, quirky characters, bits of 70s culture, and a parade of nudity, although it’s not always a good parade if you know what I mean.

FUN FACT: Tom Berenger has a bit part at the very end, as some random schlub interested in living in the apartment!

It was thrilling to see so many actors from other films, like the nefarious Prince Humperdinck from The Princess Bride, Clark Griswald’s wife in theNational Lampoon’s Various Vacations, and Mickey, Rocky‘s cantankerous curmudgeonous trainer/manager. There are more, but why ruin it.

The creepy kind of nice

But is that enough? Odd characters? Stilted lines? Nipples?

Perhaps if Walken had more screen-time I would be forgiving of the rest of it. Perhaps. But he doesn’t. And I’m not.

Chris plays Detective Rizzo, a name we would not know if it didn’t say so in the closing credits. Eli Wallach is the lead detective here, and Rizzo is just his shadow. Walken gets to bounce a few expository lines off of him, but nothing of substance occurs, nothing of notable charm. He wears a tie, he says a few words, and then he disappears, hardly a character at all.

Someone threw away a perfectly good Walken. 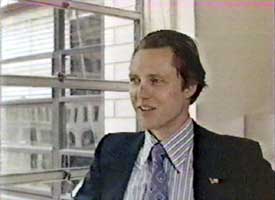 I was going to talk about the horrible acting of the star, the vacuous Cristina Raines, and maybe segue that into an observation about the film’s paternal and condescending attitude towards women, and its laughably Catholic outlook on sexuality, and possibly explore how those things undermine the attempt at scaring its audience.

I was going to, but the severe lack of Walken in this film has sapped my will to continue. You could watch this for Burgess Meredith’s performance as the super nice but increasingly creepy eccentric neighbor. You could watch this for the brief scene where a mute, spandexed Beverly D’Angelo rubs one out to breathless climax in front of a shocked and flustered stranger, you pervert you.

You could be a Jeff Goldblum fan looking for his brief and bland role as a photographer. You could even watch this for Eli Wallach’s Columbo-esque performance as the kooky but sharp detective trying to piece it all together before its too late. Or for the slimy skeazy sleaze that Chris Serandon slides upon so well.

Iocane Powder! I’d bet my life on it.

There are other reasons, surely, but none of these ‘parts’ are quite compelling enough to warrant sitting through the ‘whole’ of this awkward mess. Watch it on fast-forward. Get medicated and/or drunk. Maybe keep a book nearby to read during the slow/dumb/confusing parts.

But don’t bother if you are just looking for some more Walken. You’ll just be disappointed.